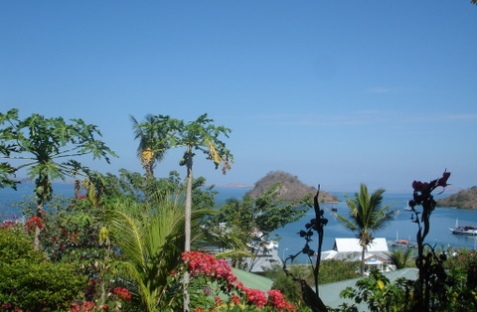 Dawn is breaking over Labuanbajo, as we settle into the small outrigger which will take us to Rinca island, home of the legendary Komodo dragon. The early morning silence is shattered when the boat captain fires up the outboard motor, it’s a noisy beast  and conversation becomes impossible, but it doesn’t matter as the scenery unfolding before me  is so spectacular that I am rendered speechless. The boat cuts across the deep inky  blue water and weaves through  the jagged volcanic islands that make up Komodo National Park. It is dry season and the islands are parched and barren, some are little more than big piles of black lava rock. Others have strips of dazzling white sand and a smattering of palm trees, while the bigger islands have villages of stilt houses. 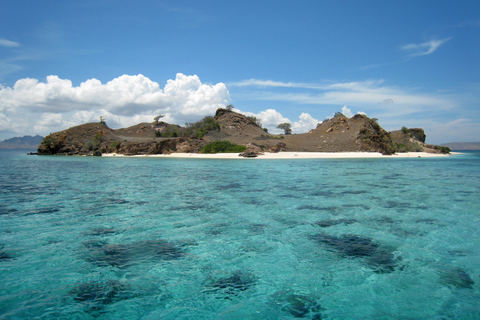 Komodo National Park lies off the west coast of the island of Flores, its pristine sea lures divers and snorkelers into a veritable underwater wonderland filled with spectacular coral formations and an abundance of marine life including giant fish, turtles, sharks and manta rays. Above ground, adventure seekers are drawn to Rinca and Komodo, the islands stalked by the world’s largest lizards, better known as Komodo dragons.

Our boat pulls up at the small wharf and we follow a mangrove lined dry creek that leads us to the National Park Office and the compound where accommodation is available in rustic bungalows. The island is windswept and desolate and feels quite primal with its savannah grasses, stark terrain and intense heat, the perfect setting for prehistoric creatures. We are assigned a guide who is, reassuringly carrying a big stick and as we walk through the compound we see our first dragons − lounging around the kitchen. I feel kind of disappointed, I had expected them to be bigger or more dragon-like or something……. Not hanging around the kitchen looking for scraps.  I am more impressed a few minutes later when we head down a rugged trail and come across a huge male, he is over two meters long and is lumbering through the grass just in front of us. We see seven more during our hike, including a female watching over her nest of eggs, as well as cockatoos, eagles, water buffalo and macaques swinging in the trees. I also see a giant bird-eating spider, which is nearly as big as my head and scares me as much as the dragons. In fact the term dragon glorifies what are essentially big smelly monitor lizards, fascinating but vile creatures that eat their young, eat each other and have been known to eat the odd human, which is why it’s not a good idea to wander off alone. The island made headlines last year when five divers washed up on the beach, having been swept 60 kilometers by strong currents. After 8 hours in the water they stumbled on to the shore, only to find themselves fending off hungry dragons with their dive fins. There is bound to be a movie!

We leave Rinca and our next stop provides us with a very different island experience. Pulau Bidadari is a tiny desert island with blinding white sand surrounded by a fluorite sea and some of the prettiest reef I have ever seen. Soft corals in shades of pastel sway gently with the currents, vibrant tropical fish dart about and the water is so clear I don’t even need a mask. We eat our picnic lunch and crash out on the sand, the only sounds come from the wind rustling the leaves of the few trees that dot the island and the waves gently lapping on the shore. Cast away fantasies don’t get much better than this, and for those wishing to get away from it all, there are dozens of uninhabited islands in the park, each featuring crystal clear water, white sandy beaches and off-shore snorkeling.  You can choose one island, sling a hammock and settle in for the day or charter a boat and go island hopping.  Some of the islands such as Seraya and Kanawa have basic bungalows and provide the quintessential escape-from-the-world experience.

For those looking for more active pursuits, there are more than 50 dive sites in the park offering some of Indonesia’s most exhilarating diving experiences.  Dancing seahorses; frolicking manta rays; close encounters with whale sharks; giant coral encrusted bommies; and over 1000 species of fish, are just some of the attractions. However the sea can be treacherous here with strong currents and whirl pools and it’s important to use reputable dive companies and to choose dive sites that are appropriate for your level of experience.

It’s late afternoon when we arrive back in Labuanbajo, a  quaint, quirky and  colourful fishing port. With stilt houses wobbling on their last legs and rickety piers that seem ready to topple over, Labuanbajo is charmingly humble. But there is  nothing humble about its setting amidst dramatic cliffs, a ring of volcanic islands and a majestic sparkling harbour that screams ‘look at me’. Sunsets here are truly magnificent and the congenial atmosphere, intoxicating bay views and friendly locals make it the perfect base for exploring the National Park. The town sprawls along the seafront with a ramshackle assortment of hotels, diveshops and restaurants. Flower pots and a profusion of bougainvillea fill the town with colour.  Like any port town life centres around the harbour and I pass many an afternoon sitting in a café, drinking the rich local coffee brewed with ginger, eating molen goring (fried bananas) and watching  harbour life. Boisterous children play in the shallows; high speed dive boats disgorge contented divers; the occasional luxury yacht sails in; while blasting horns signal the arrival of an inter-island ferry. Colourful fishing boats chug into the harbour and the fishermen pile their immense catches up on the wharves. Not surprisingly, most restaurants offer excellent, fresh-off-the boat seafood and dining here is mostly open-air, informal and pretension free. The Gardena is the liveliest hangout in town and serves up a good mix of western and Indonesian food and their snapper hot plate (Rp 20,000) is legendary. Locals and tourists crowd around makeshift wooden benches with chairs so low your chin is on the table. They also have a great range of bungalows tucked into the hillside amidst a profusion of tropical foliage and heavily laden fruit trees.

One evening I discover The Lounge, a funky café with stylish décor, chill out music, comfy sofas and a distinctly Mediterranean vibe, it seems totally out of place in Labuanbajo but is a welcome relief and the menu features tapas, pizza, a divine chocolate cake and real cappuccino. Run by Zante, a flamboyant English artist and her Javanese partner it is the only western style restaurant in town. In fact, despite being  the main tourist centre on Flores, the town  is refreshingly unspoilt. There are no souvenir shops − although the occasional hawkers peddles wooden dragons and komodo pearls, and until recently accommodation was limited to wooden bungalows or cramped losman. But the towns first 4 star hotel opened the week before I arrived, and a number of luxury bungalows are springing up. In the past its remoteness and inaccessibility kept Labuanbajo off the radar, but improving infrastructure and daily flights from Denpasar have opened up the island and change is inevitable.

The region is not only incredibly beautiful, but also has a fascinating history and has been free of the religious and political turmoil that has plagued much of Indonesia, I chat with the owner of my hotel one afternoon and he tells me that for the people here, the preservation of their ethnic traditions and culture is far more important than religious  differences, and Islam, Catholicism and Animism are practiced harmoniously side by side.  Labuanbajo’s unique culture and rich history can be attributed to waves of immigrants: Early settlers  from Sulawesi brought animism, certain rites are still practiced today including ritualistic animal sacrifice: The Bugis and Bajo sea gypsies of South East Asia brought spices, gold, and Islam (Labuanbajo translates as harbour of the Bajo): Sulawesi slave traders conducted daring raids: Portuguese explorers mapped the coastline: And Dutch missionaries converted many to Catholicism. In more ancient times, giant lizards were not the only quirk of nature to be found. The giant Flores rat  and the pygmy elephant once roamed here as did the Flores hobbit –  a species of homo erectus that grew to just over 3 feet and lived as recently as 12,000 years ago.

It’s Saturday night and we make our way up the steep hill to Paradise bar, inside it looks like a saloon straight out of the wild west, but the expansive bay views from the sprawling timber deck that stretches over the cliff top are anything but wild west and it’s the perfect place for a sundowner. We join the tourists and locals sitting out on the deck to drink cashew nut wine and watch the sun dip into the ocean against a sky of deep crimson flames. Once again I am rendered speechless, we all are, then somebody starts to clap slowly and soon we are all applauding and cheering – it was a truly mesmerizing sunset.   But I am not surprised, because here in this remarkably beautiful corner of world, nature doesn’t hold back.