Flores owes its name to Portuguese sailors who called it Cabo das Flores (Cape of flowers). It is a place of raw and startling beauty, fringed by coral gardens and surrounded by volcanic isles. Amidst the tropical flowers which cover the island are smoldering volcanoes, steaming hot springs and ancient villages where animist rituals are still practiced. A remote location in the south eastern corner of the Indonesian archipelago has saved the island from the excesses of the modern world and concessions to tourism are few, but that just adds to the magic.

My overland journey begins in Labuanbajo. I had been planning to travel by public bus, but when I meet a French couple who want to share a car and driver I am quite relieved. We head inland on the optimistically named Trans Flores Highway, a notoriously narrow, potholed, and torturously windy road that traverses the island. It leads us through dark bamboo groves, so thick that light barely penetrates; then forests of mountain pine; ridges covered in cloud forest and perpetual rain; and then back down into bright sunshine and dazzling valleys filled with flowers and vanilla trees. Passenger trucks with radios blaring zoom past us and are piled high with people, sacks of rice, goats and chickens. Oddly, each has an English name scrawled across the back, we see a ‘Bad boy,’ a ‘Sexy girl,’ and a ‘F**k you,’ particularly apt as it overtakes us on a bend and nearly collides head on with a bus. 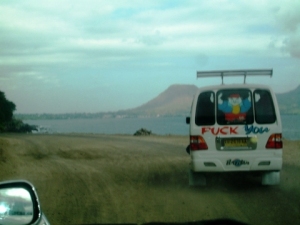 Our first stop is near the town of Lembor.  A small boy leads us up a hill where we get a clear view of a Lingko, a verdant green circular rice field shaped like a giant spider’s web. The patchwork of intricately planted field owes its origin to a traditional land rights system and is divided like slices of pie giving each family in the village a piece. The centre of the Lingko is a sacred place and the setting for ritualistic sacrifice and ancient fertility rites. 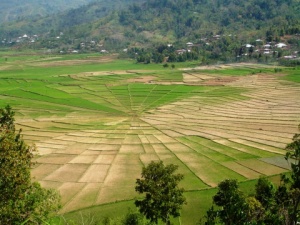 The road weaves around the chain of volcanoes and mountains in never ending circles. There are pot holes the size of craters and in some places the road has been totally washed away and is just a stone filled ditch. After 13 hours we arrive in Bajawa, a market town nestled in the mountains.  We find a restaurant and I order the only vegetarian item on the menu – spaghetti with tomato sauce, an hour later it arrives, but the suspiciously meaty looking chunks turn out to be pork.  Flores is not the most vegetarian-friendly place and I go to bed with no dinner. 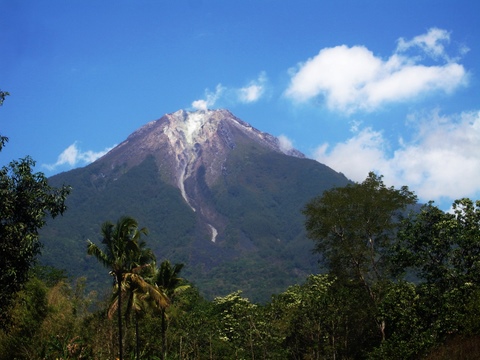 The Bajawa region is home to the Ngada people and traditional animist beliefs hold strong, including ancestor worship and gory buffalo sacrifice. It is possible to visit some of the Ngada villages and we arrive at Bena early the next morning. Cornfields, palms and papaya trees surround the traditional village which is set on a ridge in the shadow of a volcano.

Houses with high thatched roofs sit in two rows; most are adorned with buffalo horns, skulls and jawbones. Cacao and coffee beans are laid out to dry in the sun and in the centre of the village, tombs are marked by strange stone monoliths. 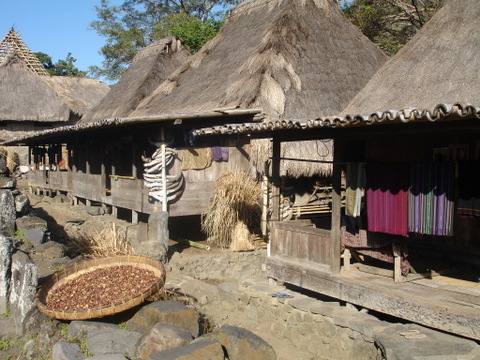 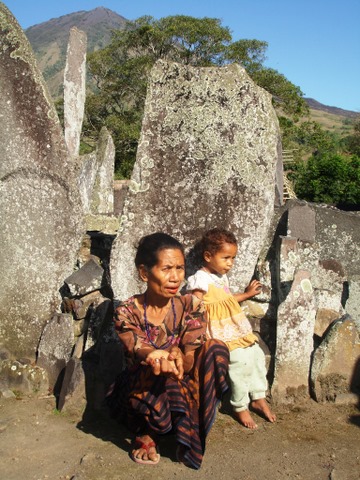 Sharing the central location are ngadhu and bhaga, thatched parasol, and mini house-like structures which symbolize the presence of the ancestors and are smeared with blood after sacrifices. The village itself is stark, the only colour coming from bright intricately woven ikat textiles which are on sale. 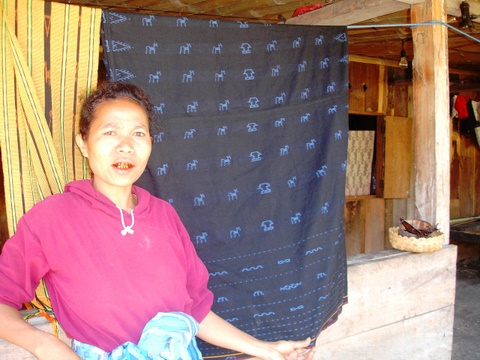 The older women are beautiful with hair piled high on their heads and sensuous blood red lips stained from the chewing of betel nuts. It’s hard to believe that villages like this still exist, but inhospitable terrain kept much of the island’s ethnic communities totally isolated until very recently. However there is no escaping globalization and I notice a group of men sitting on Coke a Cola crates. 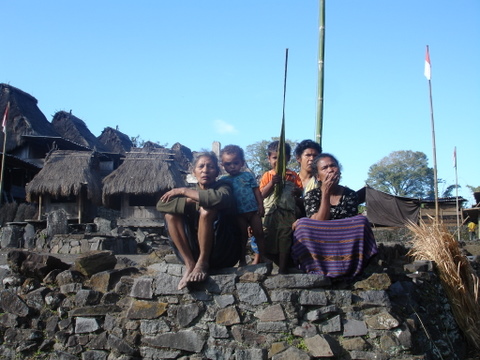 A very bumpy dirt road leads us down to a narrow gully and the Malange Mata Air Panas (hot springs).Two fast flowing rivers converge at a small waterfall, under the shade of a giant mango tree. One is clear and icy cold, the other bright green and steaming hot. The water mixes as it cascades over the rocks creating the ultimate hot shower. We immerse ourselves in the mineral enriched hot pool below the falls. Dappled sunlight filters through the bamboo and palm trees and we emerge with silky glowing skin and an intense feeling of well being. 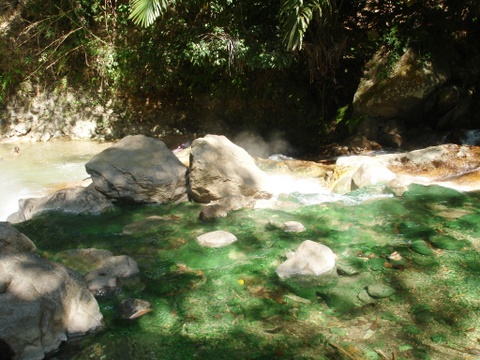 Driving through small rural villages we feel like movie stars as kids leap around in excitement,’ Hello mister’, ‘Hello sir’, ‘Hello tourist’. The road winds around dense banana groves and passes steeply terraced rice paddies, cashew nut plantations, and one picture perfect volcano after another. We make a brief stop on the coast, at Penggajawa Beach. There is no sand, instead thousands of pebbles and rocks in pastel shades of blue, aqua, pink and red. Dark thunderous clouds are strung across the sky lending a moody backdrop to what looks like a giant mosaic stretching to the horizon. 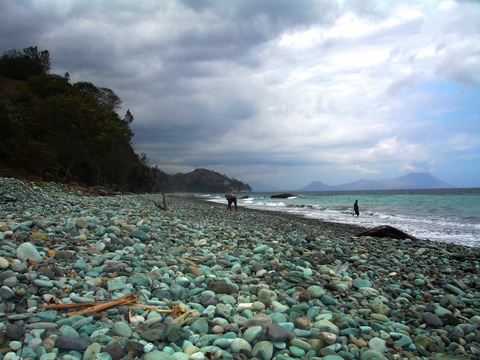 Back in the mountains, we arrive in the picturesque village of Moni at dusk. With just a smattering of basic guesthouses and restaurants, this is the gateway to Kelimutu, the fabled three coloured crater lakes that are the most famous attraction in Flores. There is an air of excitement in the village as the new community house has been completed, and as I walk down the street people keep inviting me to the buffalo sacrifice that will mark the opening ceremony. It is cold and damp and I buy a beautiful, thick ikat sarong which covers me from head to toe, it’s warm and snuggly like wearing an open ended sleeping bag. The family invites me for tea and we sit on the floor around an open hearth. They want me to come for lunch the next day and the mama whose lips and teeth are stained deep betel blood red indicates with a throat slitting motion that they will kill a chicken in my honour. I don’t even bother trying to explain the vegetarian thing.

We are up at 5.00am and follow a muddy trail through thick fog to the lookout at Kelimutu. We can’t see more than a few feet in front, let alone the crater lakes. The mists briefly part and tease us with a tantalizing glimpse of a black lake, but a minute later we are again lost in the clouds. My French travel companions are bitterly disappointed, they have to leave immediately to catch a flight, but luckily time is on my side and I take shelter from the rain in a small hut. I could cry with relief when a man turns up selling hot coffee. A German couple join me, they had been here for sunset the day before and show me incredible photos. It seems hard to believe that we are in the same place. But gradually the rain eases and far below me, encased in pastel hued crater walls and surrounded by swirling mist, the turquoise lake glimmers like a giant gem stone. 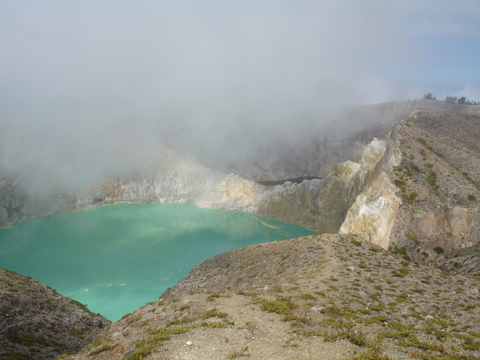 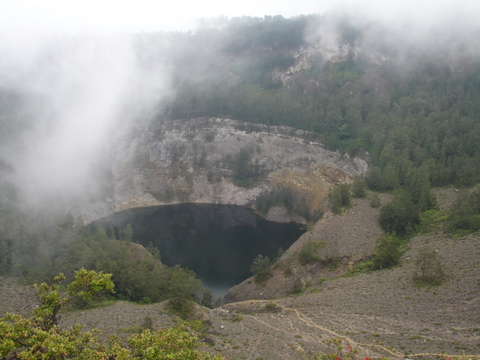 I return the next day, climbing through forests of pine and rhododendrons. Bright sunshine has banished the clouds and revealed a panoramic mountain view and an unworldly lunar landscape.  I  see all three craters and their fantastically coloured lakes; one the deepest, blackest sapphire, one the colour of melted chocolate, and next to it, fully revealed now, a luminous and shimmering lake the colour of turquoise.  It is the kind of scene that makes me yearn to be a painter; in fact it looks like a giant painter’s palette, but as happy as I am to see everything clearly, I preferred the atmosphere and sense of mystery created by the mists of the day before. 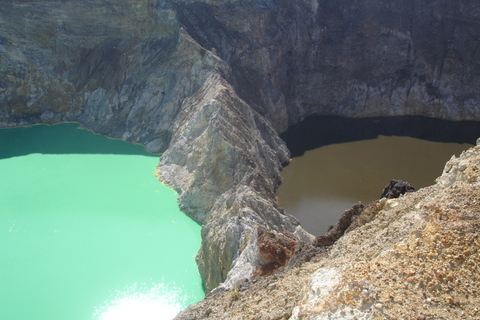 The colours of the lakes periodically change, a phenomenon that is yet to be explained. Legends surround Kelimutu which is believed to be inhabited by the spirits of the dead. Those who were wicked inhabit the brown lake (which used to be red), the souls of the young live at the green lake, while the black lake is the refuge of the old and wise.

I spend a few relaxing days in Moni and visit the bustling market, walk in the hills and discover hot springs in the middle of the rice paddies. Eventually I descend from the mountains to Ende, a hot steamy coastal city. The airport is a big shed, and check-in is a table with a plastic chair. When I ask about a boarding pass the clerk laugh and tells me to sit anywhere except the pilots seat.

There is no cafe, just a man sitting under a tree selling bananas. I sit on the grass in a state of mixed emotions: relief that I never witnessed an animal sacrifice: happy that I will soon have a hot shower and a good bed: But more than anything I am incredibly sad about leaving this enchanting island which is like no other.

New friends at The Owl and The PussyCat animal sanctuary for Locale Magazine
The light fantastic, Vivid Festival
blowing in the wind
Love the contrasts here, the turquoise hues of the lake, the bleak snowy mountains and this quaint little church on the banks of Lake Tekapo. And yes... it’s as cold as it looks. #laketekapo #travelnz #nzsouthisland #alisonbonetravels #beautifuldestinations
The ocean looks just a little bit cold for swimming - unless you are a seal 😊 #kaikoura #roadtrip #alisonbonetravels #travelnz #nzsouthisland
In 2016 the devastating 7.8 earthquake in Kaikōura causes dramatic changes to the coast, pushing up seabeds such as these that are home to a large seal colony. Such a privilege to be able to get so close to these beautiful creatures. #kaikoura #travelnz #alisonbonetravels #beautifuldestinations #sealife #southislandnz