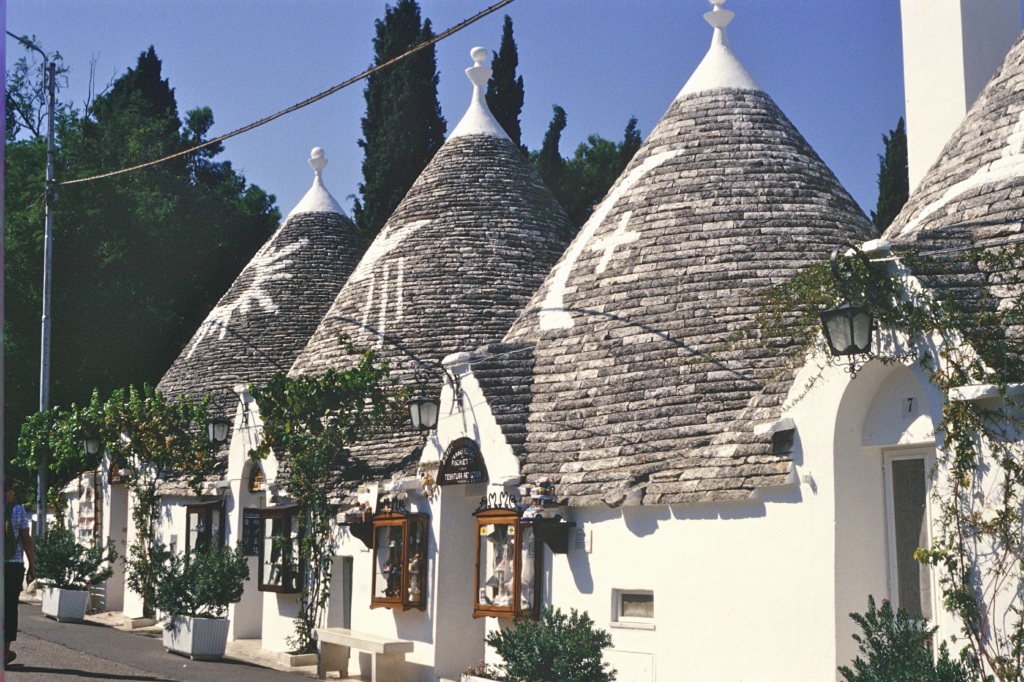 There is a saying in the south of Italy – that the north is always covered in fog so people can’t see clearly. Life is certainly slower and more traditional in the predominantly rural south, and in the province of Puglia you find Italy at its sleepiest. Those who choose to spend some time here get a taste of real Italy, with its traditional villages, quiet beaches and medieval architecture without being just another face in a sea of tourists.

The old walled city of Polignano a Mare is perched on a grotto riddled rocky outcrop 30 kilometres south of Bari. Ancient houses constructed from local tufa blend so perfectly with the cliffs that they seem to have been carved from them. Narrow winding alleyways filled with flowerboxes and laundry drying in the breeze lead to expansive terraces overlooking the fluorite sea. In the evenings spotlights cast their glow over the cliffs and shimmering waters. The labyrinth of caves etched by waves crashing into the calcareous rocks is so deep it reaches under the centre of the town. Renting a boat is a great way to explore the coastline and caves, some of which have little shingle beaches deep inside. The grand and cathedral like Grotta Palazzese is the largest and best known, the roof of the cave is more than twenty metres high and its luminous walls gleam under the floodlights. The Hotel Grotta Palazzese has been constructed around it, and staying here is like dwelling inside the cliffs themselves. A naturally formed balcony lends itself perfectly to a restaurant, the food is overpriced but the experience of dining by candlelight while shadows dance on the walls and gentle waves lap against the rocks is priceless.

Until a few years ago the numerous caves and unpatrolled beaches in Puglia made the region a haven for smugglers of contraband (and sometimes people) from Eastern Europe. Operation Primavera signalled the end of this lucrative trade when hundreds of police and soldiers descended on the area in a massive clean-up operation.

Afternoons in Polignano are strictly for siestas, everything shuts down and the streets are totally deserted, but in the cool of the evening the bars and cafes fill with people drinking espresso. Chairs appear on the pavements and the town’s inhabitants sit gossiping noisily with their neighbours. People are friendly and curious and shopping takes forever as I have to stop and chat in my broken Italian. Everyone wants to know my details, when I explain my Italian boyfriend has family here they clap their hands and say “Brava”, and tell me how fortunate I am to have an Italian man. Like any small town, everyone knows everyone’s business, and after staying for a month I am a bit concerned that everyone knows my business, which chiefly involves gorging myself on the gorgeous food. As always when in Italy, food is my obsession; sweet pastries, white pizza with rocket; focaccia dripping with olive oil, soft creamy gelato and that’s just for snacks. I have given up trying to make sense of the opening hours and conclude that apart from the busiest summer months, shops and restaurants just seem to open randomly. If the focacceria is open I feel compelled to buy a focaccia, just in case it is closed later. I also apply this motto to the pasticceria, pizzeria and gelateria and not surprisingly now have trouble squeezing into my clothes.

Some of Italy’s finest food is produced here, the land is rich and fertile, the soil a deep earthy red. The gnarled and twisted trunks of thousand year old olive trees dominate the landscape, interspersed with vineyards, cacti, orchards, fig and carob trees. September is olive season and the ancient trees are heavy under the weight of their fruit. Nets are draped beneath the branches and for a few weeks everyone is busy picking and extolling the virtues of their olives. More than half of Italy’s olive oil is produced here and little three wheeled trucks piled high with olives chortle down the streets headed for the local presses.

Food is a serious affair in Italy and eating can be almost ritualistic. Dinner with friends at their villa one night starts at 10.00pm and it is 4.00am before I waddle out. I just can’t believe the mounds of food that keep appearing on the table. “Mangia, mangia” (Eat, eat) the cheerfully plump Italian mama orders me, “you’re too skinny”. There is homemade olive oil, homemade wine, freshly baked crusty bread, platters of seafood, meats and pasta, fruit from the garden, homemade Tiramisu. Not content with feeding 12 people, mama hauls out the biggest pot of pasta that I have ever seen and proceeds to feed at least 20 cats, which suddenly appear.

The cafe speciale, coffee steamed with almond liqueur, fresh cream and a slice of lemon is another one of my indulgences and I often find myself at Bar dei Pazzi  (crazy bar) on the piazza inside the walls of the old city. Antonio, the owner does seem a bit mad, when I tell him I am from Australia he says, “look, I am a kangaroo” and leaps around the piazza.

The Itria valley lies south west of Polignano and is home to Puglia’s most famous phenomenon, the trulli – circular stone houses with conical rooves topped with pinnacles. The quaint and quirky town of Alberobello has over 1500 beautifully preserved trulli and looks like something straight out of a fairy tale. The earliest trulli have been dated to the 12th century and these mortarless dwellings were constructed using roughly worked limestone boulders with rooves of limestone slabs.

Traditionally they were peasant dwellings and their history is less romantic than I had imagined. It is thought that their proliferation in the 16th century was due to the fact that they could easily be destroyed, or less drastically, stones could be removed from the top when inspectors arrived, thus avoiding the need to pay property tax which was levied on all permanent, completed dwellings. They are deceptively spacious inside and their thick walls, small windows and high ceilings make them very cool in the heat of the summer. Unlike the rest of Puglia, Alberobello has been keen to exploit its tourism potential and many of its trulli are now gift shops. Signs invite you to come in and experience the trulli, unfortunately you will also experience a hard sell from the owner, anxious for you to purchase a book, a miniature plaster trulli or an ornate stiletto shaped bottle filled with a suspicious and pricey green liqueur.

Public transport in the area is limited and the best way to see Puglia is by car, but be warned, the drivers here seem even crazier than in the rest of Italy. Everyone tailgates, no one indicates, there seems to be no speed limit and if there are no parking spaces people just park in the middle of the road.   Nevertheless, having a car allows you to explore the area at leisure. If you want to find an empty beach, just turn off any dirt track that says ‘Mare’.

We discover the town of Ostuni while driving along the coast one evening. It looms before us like a giant golden cruise ship lit up with fairy lights. It is known locally as La Citta Bianco (White City), and its whitewashed houses and Baroque churches crawl down the hillside. We feel compelled to stop for a pizza and spend an enchanted evening wandering through the walled city with its maze of rooved passageways, decorative archways and elaborate stone staircases.

Bari, the capital of Puglia was founded by the Greeks and became a commercial centre under the Romans. The city has some impressive architecture including  stunning churches. The church of San Nicola, founded in 1087 contains the relics of Saint Nicholas (patron saint of Russia) and has been drawing pilgrims for centuries.The old city is a great place to lose yourself although it’s not wise to wander around after dark. Historically, the city’s walls protected its inhabitants from the fierce wind and even fiercer invaders.

In vivid contrast the new city is becoming increasingly cosmopolitan and features wide spacious boulevards, fast food outlets, designer boutiques and mobile phone shops. I am reminded that even here in this seemingly timeless and forgotten corner of Italy, change is inevitable. The region is busy promoting itself as the new Tuscany, hopefully this wont come at the expense of the old Puglia. 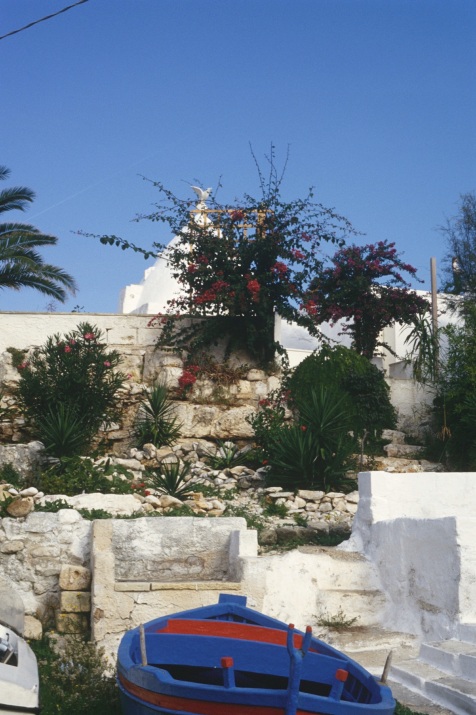