Seventy four thousand years ago Sumatra was rocked by one of the biggest volcanic eruptions of all time. Anthropologists believe that the resulting dust cloud that covered the earth killed most of the planet’s population. From the mouths of hell sprang the tropical island paradise of Samosir, perched in the middle of Donau Toba the world’s largest crater lake. 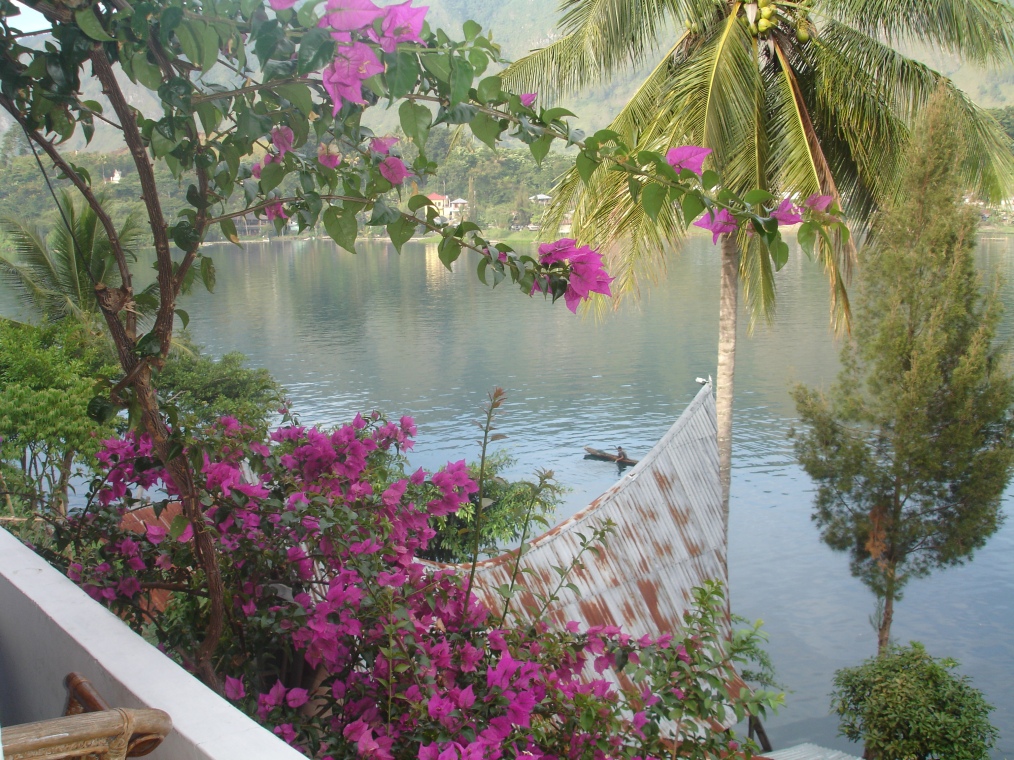 I travel by bus from the south of Sumatra, a long crazy night in which our driver, sporting an Elvis quiff and a purple satin shirt, has the radio cranked and sings enthusiastically for the whole journey. In what appears to be a nightly ritual, we also make frequent stops at the roadside karaoke bars where he croons Indonesian love songs while we all wait on the bus.

It’s a relief to arrive in Parapat, the gateway to Toba Lake, and I am just in time for the first ferry. We glide across the thermal waters, before us looms the mountainous island of Samosir, its peaks shrouded in mist. Covering an immense 1700 square kilometres Donau Toba is the largest lake in South East Asia, and Samosir, which is almost as big as Singapore, is the world’s largest island on an island.

It is a place of panoramic vistas, covered in sprays of bougainvillea, fields of sunflowers and dense banana groves. Traditional boat-shaped Batak houses with their enormous saddleback roofs and elaborate carvings line the shores of the lake. The Batak people who inhabit the island are descendents of an ancient war-like cannibalistic kingdom that was converted to Christianity by Portugese and Dutch Missionaries. The new religion was adopted with zeal and countless Church steeples poke out from the tropical foliage. 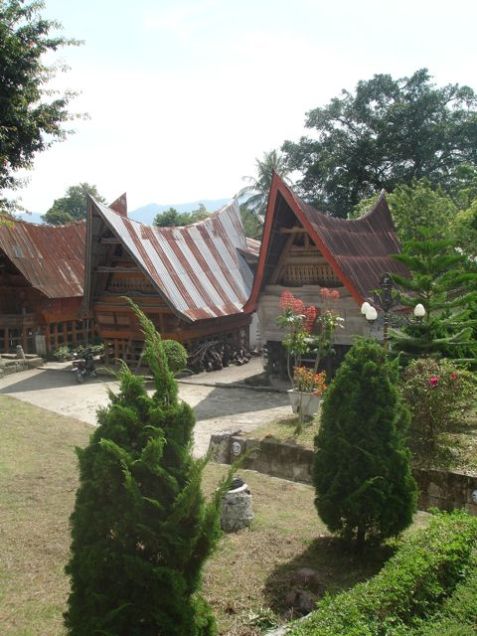 I rent a Batak house which sits like a beached hulk, just meters from the lake and is decorated with hand-woven blankets and tribal masks. It’s like being on a house boat, but without having to worry about sea sickness, and manages to be cosy despite its soaring ceiling.  These traditional stilt houses have a beautiful symmetry and are rich in symbology, featuring 3 levels of existence, the tall roof reaching to the gods, the middle part where the family lives, and the bottom part for animals and the mythological dragon. The tiny doorway is designed so you have to bow down to enter the house, thus paying respect to the people inside. The gables are decorated with carvings of serpents, lizards and birds and the side beams are adorned with large carvings of ‘singa’, a mythological lion with bulbous eyes which is said to radiate positive energy and will apparently shield me from disease and evil.  I have to say that I sleep incredibly peacefully.

I wake each morning and dive into the clear, glassy lake which is infinitely enticing with its soft water that is just cool enough to be refreshing. Life here centres on the lake. People wash themselves, their clothes and their dishes; children frolic; fishermen in tiny dug-out canoes ply the water, as they have done for centuries. Late one afternoon an angry black storm creeps across the lake, whipping it into a frenzy of waves.  By dusk the storm has blown itself out and leaves a swirling fog in its wake. I can just make out the shadow of a man washing in the lake; he sings a soulful lament, his haunting voice wafting like the mist across the water.

My house sits on the corner of the Tuk tuk peninsula which juts out of the eastern side of the island and overlooks a picturesque bay on one side and the vast expanse of the lake on the other. A tourism boom in the early 1990’s saw hotels and restaurants spring up all over Tuk tuk, but these days they are mostly empty and the island is quiet.

It is a peaceful and laid-back place where tourism is squeezed between daily chores; attending weddings; harvesting crops and drinking Tuak (palm wine,) a favourite past-time of the Bataks.  I am drawn into Orari restaurant one evening by the sign out the front which says, “Lake Toba Wine – maybe not the best but we try to be.” Bottles steeped with fruits and herbs line the bar, I choose one at random and the bar man pours me a glass. The sign is right, it’s not the best, but it is definitely palatable and has quite a kick which adds a slight weave to my walk home.

The Batak people are fun-loving, friendly and love to sing. The traditional music is folksy and rousing, and singing is a natural accompaniment to most activities; riding a motorbike; cooking; taking a bath in the river; and most enthusiastically, while drinking Tuak. I constantly find myself in random exchanges with people. As I walk down the street one day a woman calls out to me, “Hey you – I like your body, you not too fat, you normal, it’s good”. When I have a problem with the lights in my house I call the owner. He says, “I better call the electrician before he gets drunk.” He returns twenty minutes later and says, “Sorry, too late, he’s already drunk.” I am happy to make do with candle light.  One afternoon I chat with a local guide named Luca. I ask about the volcano that once lay beneath us, he shrugs his shoulders and says “That’s what the scientists say,” and proceeds to tell me the ‘real story’ of Toba lake. “A long long time ago a man caught a fish in a stream, but the fish talked to him and said don’t eat me because really I am a woman and if you save me I will become your wife, but you must never tell anyone I was once a fish. Sure enough the fish turns into a beautiful woman who bares him a son. One day, in a moment of anger he calls the boy a son of a fish and with this betrayal the woman becomes a fish again and weeps for every more, filling the lake with her tears.”

I rent a bright red automatic scooter, and set out to explore. My first stop is in Ambarita where the roadside market is brimming with hand woven blankets, miniature carvings of batak houses and hand tooled leather craft. On a hill behind the market a megalithic site set in a dark grove provides a silent testament to the island’s cannibalistic past.  The circle of 300-year-old stone chairs was once the conference area for Batak kings and a place for passing judgement on a criminal or enemy prisoner. At an adjacent site, the accused would be bound, and rubbed with chilli and garlic and then beheaded with a long knife. A local man shows me around and points out thespecial curved stone where the beheadings took place. He explains that the head would be thrown into the lake and the body cut into small pieces that were mixed with buffalo meat and boiled into a stew. “Fortunately,” he says, “we are now Christians and do not eat men any longer.”

Some of the island’s best preserved Batak houses are also found in Ambarita and are set up as an open-air museum which  incorporates another set of stone chairs built around an ancient banyan tree. The banyan is the tree of life for the Bataks and these majestic trees with their branches twisting and turning in every direction are found all over the island. Heading north I leave the lush rainforest, palms and banana plantation behind and find a sparser more mountainous landscape, with low lying areas planted with corn, rice and vegetables. Family tombs shaped like miniature Batak houses are so prolific that there seems to be no vista that does not incorporate at least one. Ancestor worship remains a strong custom on the island and the tombs are built above ground so that everyone can see and never forget. Some are quite small and simple, while others are huge and topped with large crosses and life-sized statues representing the departed.

I follow a rough and bumpy dirt track up into the mountains. The panoramic view allows me to appreciate the immensity of the crater and the cataclysmic explosion that caused it. Nature at its most furious has created a place of infinite beauty, peace and refuge, the island is the calm after the storm.